Treblinka (pronounced [trɛˈblʲinka]) was an extermination camp,[b] built and operated by Nazi Germany in occupied Poland during World War II. It was located in a forest north-east of Warsaw, 4 kilometres (2.5 mi) south of the Treblinka train station in what is now the Masovian Voivodeship. The camp operated between 23 July 1942 and 19 October 1943 as part of Operation Reinhard, the deadliest phase of the Final Solution During this time, it is estimated that between 700,000 and 900,000 Jews were killed in its gas chambers. along with 2,000 Romani people More Jews were killed at Treblinka than at any other Nazi extermination camp apart from Auschwitz by the German SS and the Trawniki guards – enlisted voluntarily from among Soviet POWs to serve with the Germans – the camp consisted of two separate units.Treblinka I was a forced-labour camp (Arbeitslager) whose prisoners worked in the gravel pit or irrigation area and in the forest, where they cut wood to fuel the crematoria. Between 1941 and 1944, more than half of its 20,000 inmates died from summary executions, hunger, disease and mistreatment.
The second camp, Treblinka II, was an extermination camp, or the Vernichtungslager (in German), referred to euphemistically as the SS-Sonderkommando Treblinka by the Nazis. A small number of Jewish men who were not killed immediately upon arrival became its Jewish slave-labour units called Sonderkommandos, forced to bury the victims’ bodies in mass graves. These bodies were exhumed in 1943 and cremated on large open-air pyres along with the bodies of new victims. Gassing operations at Treblinka II ended in October 1943 following a revolt by the Sonderkommandos in early August. Several Trawniki guards were killed and 200 prisoners escaped from the camp; almost a hundred survived the subsequent chase. The camp was dismantled ahead of the Soviet advance. A farmhouse for a watchman was built on the site and the ground ploughed over in an attempt to hide the evidence of genocide.
In postwar Poland, the government bought most of the land where the camp had stood, and built a large stone memorial there between 1959 and 1962. In 1964 Treblinka was declared a national monument of Jewish martyrology, in a ceremony at the site of the former gas chambers. In the same year the first German trials were held regarding war crimes committed at Treblinka by former SS members. After the end of communism in Poland in 1989, the number of March of the Living visitors coming to Treblinka from abroad increased.

Participants in Treblinka from 2018 March of the Living trip 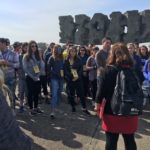 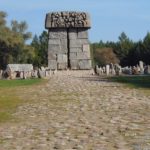 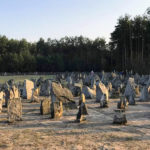 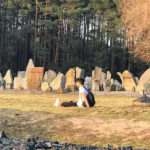 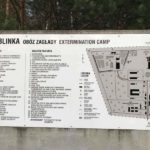 Participants in Treblinka from 2018 March of the Living trip 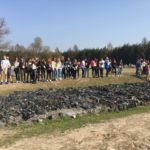